Input caption text here. Use the block's Settings tab to change the caption position and set other styles.
THE BEAUTIFUL STAINED GLASS WINDOW AT THE FRONT OF OUR CHURCH DEPICTS THE FOLLOWING FOUR SAINTS 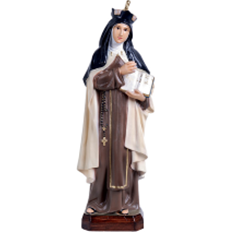 St Teresa of Avila
(Mar. 28, 1515 – Oct. 4, 1582) known in religion as Saint Teresa of Jesus was born at Avila, Old Castile, Spain, and was a prominent Spanish mystic, Carmelite nun, and writer of the Counter-Reformation.  She was a reformer of the Carmelite Order and is considered to be, along with Saint John of the Cross, a founder of the Discalced Carmelites.  Teresa’s mother was especially keen to raise her daughter as a pious Christian.  Theresa was fascinated by accounts of the lives of the saints and ran away from home at age seven with her brother Rodrigo to find martyrdom among the Moors.  Her uncle spoiled their plan!  Leaving her parents’ home secretly one morning in 1534, at the age of 19, Teresa entered the Monastery of the Incarnation of the Carmelite nuns at Avila.  In the cloister, she suffered greatly from illness.  Early in her sickness, she experienced periods of spiritual ecstasy through the use of the devotional book, Abercedario spiritual, published in 1537-1554.  As the distinction between mortal and venial sin became clear upon her, she says she came to understand the awful terror of sin and the inherent nature of original sin.  She also became conscious of her own natural impotence in confronting sin, and the necessity of absolute subjection to God. In the mid-fifteen hundreds, Teresa began a reformation of the Carmelite monasteries and the establishment of new monasteries throughout the country.  With the help of John of the Cross and Anthony of Jesus two houses for Discalced Carmelite Brethren were opened.  In 1576 a series of persecutions began on the part of the older observant Carmelite order against Teresa, her friends, and her reforms.  The establishment of further convents was forbidden.  The General condemned her to voluntary retirement.  Finally, after several years, the persecutions stopped, and more convents were founded.  Teresa died in 1582.  She was canonized forty years after her death and her feast day is October 15.  In 1970, she became the first woman to be named a Doctor of the Church.  Teresa of Avila is one of the foremost writers on mental prayer. Her definition was used in the Catechism of the Catholic Church:  “Mental prayer is nothing else than a close sharing between friends; it means taking time frequently to be alone with him who we know loves us.”

Elizabeth of Hungary
(c. 1207 – Nov. 17, 1231) was the daughter of King Andrew ll of Hungary and his wife, Gertrude.  A political marriage was arranged for Elizabeth when she was four years old, which was often the custom.  However, Hermann died before this marriage took place and she married his brother, Ludwig when she was fourteen.  They had three children.  Her husband was often away.  In the spring of 1226, when floods, famine and the pest wrought havoc in their region, Ludwig was in Italy attending to business on behalf of the Emperor and the empire. Under these circumstances, Elizabeth assumed control of affairs, distributed alms, giving even state robes and ornaments to the poor.  She had a hospital built and visited the inmates daily to attend to their wants.  Her dear husband died in 1227.   Elizabeth was crushed and cried out:  “The world with all its joys is now dead to me”. Elizabeth became involved with Franciscans who had moved to Germany.  She was instructed in the teachings of St. Francis of Assisi to observe, according to her state of life, chastity, humility, patience, the exercise of prayer and charity.   Her position prevented the attainment of the other ideal of St. Francis - voluntary and complete poverty.  Elizabeth ardently desired a life of poverty.  After the body of her husband was returned to Germany for burial, Elizabeth and her maids received the dress of the Third Order of St. Francis, thus being among the first tertiaries of Germany.  In 1228 she built the Franciscan hospital at Marburg and on its completion, devoted herself entirely to the care of the sick.  Completely devoted to God, Elizabeth’s strength was consumed by her charitable works and she died at the age of twenty-four. Soon after her death, miracles began to be worked at her grave, especially miracles of healing.  Elizabeth was canonized by Gregory lX.   Elizabeth is generally represented as a princess giving alms to the poor or holding roses in her lap.  The legend says that she was surprised by her husband when she was on an errand of mercy, and so the bread she was trying to conceal was suddenly turned into roses.

St Margaret of Scotland
(c. 1045 – Nov. 16, 1093) was the daughter of the English prince Edward the Exile and Agatha.  She was probably born in Hungary.  When her uncle, Edward the Confessor, died in 1066, she was living in England. According to tradition, after the conquest of the Kingdom of England by the Normans the widowed Agatha decided to leave Northumberland with her children and return to the Continent, but a storm drove their ship to Scotland where they sought the protection of King Malcolm lll.  Margaret ended up marrying King Malcolm. They had eight children, six sons, and two daughters.  With her goodness and kind nature, she had a great influence on her husband and the country of Scotland.  She contributed much to her adopted country by promoting the arts of civilization and encouraging education and religion.  She made the effort of obtaining good priests and teachers for all parts of the country.  One of her sons became St. David.  Her husband Malcolm lll, and their eldest son, Edward, were killed in a fight against the English on Nov. 13, 1093.  Margaret was ill, and she died three days later.     Margaret was canonized in 1251 by Pope Innocent lV on account of her personal holiness and fidelity to the Church.  During Advent and Lent, she would rise at midnight to attend church services.  She would personally serve orphans and the poor every day before she herself would eat.

St. Thérèse de Lisièux
(Jan. 2/1873 – Sept. 30, 1897) also called Thèrésè of The Child Jesus and of the Holy Face and also known by many as The Little Flower of Jesus was born in Alencon, France.  She was canonized on the 17th of May, 1925 by Pope Pius Xl. She was born to a very religious set of parents who had nine children.  Only five survived to adulthood.  Thérèse was the youngest.  Her mother died when Thèrésè was only four.  When she was nine, her sister Pauline, her “second mother” entered the Carmelite monastery at Lisièux.  Thérèse also wanted to enter but was told she was too young.  At 15, when her sister, Marie entered the same convent, Thérèse renewed her attempts to join the order, but the priest-superior would not allow it because of her youth.  On a pilgrimage to Rome with her father, Thérèse implored the Pope to let her enter, but he told her to do what the superiors decide.  Shortly after this, the bishop authorized the prioress to receive Thérèse and in 1888 she became a Carmelite novice.  Her father died in 1894.  After his death, Céline entered the same Carmelite convent as her three sisters.  Her other sister, Leonie became a nun in the Order of the Visitation at Caen.  Thérèse is known for her “little way”, because for her she discovered this as the means of attaining holiness and expressing her love for God.  In her actions, this meant offering little sacrifices to God throughout her day; in her spirituality, it was focusing on Scripture only when she found she was unable to understand the great writers of the Church; and, her prayer was simple remarks to the Lord.  She died on Sept. 30, 1897, at the age of 24.  On her death bed, Thérèse is reported to have said, “I have reached the point of not being able to suffer anymore because all suffering is sweet to me.”